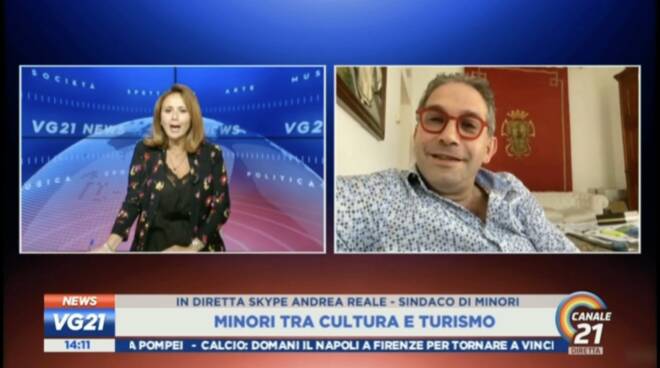 Why and When to Visit Minori

by Lucy Gordan I Travel

Tucked away in a narrow inlet since ancient times, the small coastal town of Minori is located directly below Ravello, the more famous hill-top town beloved by Wagner, who wrote “Parsifal”there, and by many writers: Gide, E.M. Forster, D. H. Lawrence and Gore Vidal, to name just a few. It’s also only a ten-minute, once-an-hour, ferry ride to or from Amalfi with its magnificent Byzantine Cathedral dedicated to St. Andrew, Italy’s most sought-after church for weddings (pre-Covid some 400 a year).
Although it’s not as glamorous as these two jet set neighbors with their several luxurious hotels: “Villa Cimbrone” and “HotelCaruso” in Ravello and “Santa Caterina”and the newly- renovated “Grand HotelConvento” in Amalfi, Minori’s a pleasant destination not too“far from the madding crowd”with a nice sandy beach and a spacious lungomare for a leisurely romantic stroll and aperitivo at sunset.
One of the best times to visit Minori is during Gustaminori, a cultural and eno-gastronomical festival held annually for the past25 years during the second half of August. This year the lucky guests of the Gustaminori Coporation for three days, six other journalists and I came for a unique Minori tradition: to celebrate Christmas on August 24th, 25th and 26th. On the 24th“Panettone Night” 34 chefs from Italy’s 20 regions, all members of the Accademia del Lievito Madre founded my Minori’s most famous citizen pastry chef “Sat” De Riso, passed out free artisanal panettoni samples to the townspeople and visitors on the lungomare.

Speaking of lemons, you cannot leave Minori without stopping at Sal De Riso’s bistro for “pizza Amalfi” (the topping: provola, fior di latte, prosciutto from Parma, ginger, and lemon slices) or”delizia al Iimone”(lemon cream on a slice of sponge cake encased in a limoncello and white chocolate icing). Several of Sal’s pizzas are named for other towns on the Amalfi Coast and a few of his cakes for family members.

The celebrations on “Christmas Eve”ended at midnight with a bang: a fifteen-minute magnificent display of fireworks on the beach. Another Gustaminori 2021 spectacle, Drama De Antiquis-Fantasite 5.0, a musical with some 30 actors, musicians, and ballerinas, was also dazzling. It was performed in Minori’s most important monument, an enormous (2,500 square meters) ancient Roman villa built in the first century A.D by a wealthy Roman as his summer seaside residence. For Minori, possibly founded by the Etruscans in the 7th century B.C. and thus probably the oldest settlement on the Amalfi Coast, was certainly already a vacation spot at the beginning of the Roman Empire. Written for the occasion and using video mapping to recreate the villa’s rooms as they looked 2000 years ago,“Drama” is a love story-a mixture of fantasy and history-about the family living in the Villa on the day Mount Vesuvius erupted in November 79 A.D. Yes, recent archeological finds, like the remnants of woolen clothes and dried fruits and beans, date the eruption to November, rather than the long-believed August night.

The villa with once very special mosaics and wall paintings, now sadly in very poor condition because of neglect, and its small but well-explained museum, are the second most visited archeological site in the province of Salerno after Paestum. The Ministry of Culture has allocated 5 million euros to restore it, but the funds are still tied up in bureaucratic red tape.

Another special time to visit is Advent to admire Minori’s elaborate presepi (créches) with their numerous terracotta figures, a Neapolitan and thus a local tradition. They’re only put on display during the Christmas Season in the Churches of Santa Lucia and Santa Trofimena, dedicated to the Sicilian-born patron saint of Minori; in the Confraternity of the Holy Sacrament and in the central square Largo Brandolini.

However, Minori’s most special créche figures are not made of terracotta, but rather of carved wooden cutouts painted with acrylics by 72-year-old native-son Giacomo Palladino, who taught art and art history for some 30 years in Sondrio in very northern Italy before returning to Minori a little over a decade ago. His créche started as a didactic project for his students and gradually over the years increased in size. Now it’s usually housed in the Antica Scuderia, a building which dates to 1700 and later was used by King Victor Emanuel III (1869-1947) as his stables when he visited Ravello. First displayed in Minori in 2012, today Palladino’s créche depicts the scenes of the Annunciation, the Visitation, the Massacre of the Innocents, the Nativity, the sleeping shepherd Benjamin’s Dream, the Adoration of the Magi, and the Flight to Egypt. All its some 100 figures, between 50 and 180 cm in height, are copies of figures in paintings dating from the 1300s to the 1800s. Many are from works by Giotto, Botticelli, Raphael, Michelangelo, Caravaggio and the Venetian Renaissance painters; to name a few his Madonna by Correggio, his San Giuseppe by Murillo, and the Adoration of the Magi by Gentile da Fabriano. Palladino also painted the backgrounds: landscapes of the Amalfi Coast with the sea, castles, and lemon groves. If you can’t get to Minori this Christmas, you can still enjoy Palladino’s unique masterpiece vicariously by clicking on presepe dipinto di Giacomo Palladino-Pro Loco Minori to watch videos on YouTube filmed during several different years, so each slightly different because Palladino either moves some of his figures or adds new ones. Truly unique, hopefully before too much longer the créche will be visitable year-round.

The créche is not Palladino’s only work-of-art in Minori. The other in the courtyard of the Confraternity of the Holy Sacrament is a large (20 meters long and 1.3 meters tall) ceramic tile frieze he designed. It depicts in blue episodes of the traditions of the hooded anonymous “beaters”dressed in long white robes. They are male penitents who for centuries have led the Holy Week’s processions through town while singing various chants (in 2010 declared “intangilble cultural heritage” by Italy’s Ministry of Culture) and flagellating themselves with rough rope cords. Although they no longer practice self-flagellation, the Confraternity’s battenti still lead Minori’s Easter Processions (definitely a third reason to visit Minori). All the townspeople participate and you’re welcome to join in. The rest of the year the battenti devote themselves to helping Minori’s less fortunate citizens.

On the walls of the Confraternity’s sacristy are 29 other unique works-of-art depicting religious subjects: the Last Supper, St. Trofimena, and the Madonna as well as views of Minori. At first sight they look like paintings; instead they’re embroideries made of colored cotton threads by a native-son World WarTwo veteran, Alfonso Florio. After returning home he devoted himself to this art form. He’d learned it while a prisoner-of-war in India to rehabilitate his hands that had been badly frostbitten while serving in the Russian Campaign (1941-43), where over 30,000 Italian soldiers died in battle and another 54,000 in captivity. During anytime of year, although best to avoid the hottest months for lack of much shade, you can admire Palladino’s and Florio’s scenery firsthand by taking a walk on a“Lemon Path”, another unforgettable experience. Trekking is a favorite sport on the Amalfi Coast and there are many“lemon paths”to choose from on the internet.

Our tour’s path, between Minori and Maiori, the neighboring town on the opposite side of Minori from Amalfi, originally was an ancient Roman road, which today counts c. 800 up- and-down steps if you complete its entire 7 km. route. Estimated time is 3-4 hours, cost 15 euros.

Luckily for me, thanks to the founding father and promoter of“Iemon paths”, Michele Ruocco, a retired banker turned agronomist and very active member of Pro Loco Minori, it’s recently become possible to drive nearly half way up to the hamlet of Torre near the lovely little church of san Michele Archangelo, which dates to 936 AD and was probably built on the site of a pagan temple. Michele, a walking encyclopedia of local cultural, was our group’s guide.

On a terrace overlooking Minori and the sea in the shade of an ancient tree, Michele gave us a brief history of Amalfi’s spindle-shaped lemon.“It probably arrived on the Amalfi Coast, already an important port in ancient Roman times, possibly thanks to Jewish slaves’ he said, “or, in any case, from the Middle East, because for several centuries Amalfi monopolized trade with the Middle East. Initially it was small and practically inedible, but overtime was crossed with local bitter oranges. Known as the”nostrato”, the ancestor of today’s“sfusato” or“spindle-shaped”, it was grown to provide sailors with vitamins C during their long sea voyages to avoid scurvy. For several centuries along with fish, it was the main sustenance of the local populations.

After a quick stop in the church with Michele we visited a lemon grove. Here he explained: “Over the centuries this unproductive rural landscape was transformed into terraces, each one demarcated by large dry stone walls and often only accessible by a steep staircase. The lemon trees’ branches, when young, are carefully twisted around wooden trestles covered with black or green nets to protect them from the wind and hail. Everything is still done by hand. The harvest lasts from around February 1to October 31 producing some 1,700,000 kilos a year along the Coast, most of which is sold in Italy. The other months are devoted to pruning, maintaining the trestles, and protecting the plants from frosts

“Our paths are too narrow and too steep for motorized transports, not to mention the stairs”, continued Michele,”so until recently it was the women’s job to carry down on their shoulders to the sea baskets loaded with some 50 kilos of lemons each. They were nicknamed ‘formichelle’ or”little ants”for that’s what their processions looked like. Today men help too as do mules

After a tasting of lemon products, we walked down the 398 steps back to Minori stopping half-way at the family-run agriturismo“Cuonc Cuonc” (“Slowly Slowly”) for a snack of homemade goat and sheep cheese accompanied by homemade several jams and condiments, two salads of ingredients from their vegetable garden, and additional lemon dishes. To end on an extremely positive note: about a month after our visit, Minori’s super-energetic mayor, Andrea Reale, in his fourth and last term, sent me s press release. It reported that, according to the media monitoring company Extreme Web Live, Campania was Italy’s most photographed region by tourists during July and August 2021: Naples in first place followed by Capri, with Minori as a close third. Reale is also the owner of the Hotel Villa Romana where I stayed. It has a spa, swimming pool, and the best breakfast in town. The sfogiatelle and mini tarts filled with pistachio cream are to-die-for.

On the practical side, the best way to reach Minori is via the fast freccia rossa train from Naples to Salerno and then by a rented car or local bus for the 45-minute drive. If you come a Christmastime it’s worth spending one night in Salerno to enjoy the city’s“Festival of Lights”with a different theme each year, its Christmas market of handmade crafts and foods, and its créche made of sand.